Next Wednesday night, January 19th, there’ll be a full moon in the sky: the full moon of Shvat. The indigenous Israelites from whom we descend celebrated this as the start of the year for the natural world. Like lots of elements of Jewish tradition, we never forgot it, even as its meaning has changed over time.

Skip forward to 5771, aka 2011. Tu B’Shvat’s a great holiday, and there’s every likelihood there will be a record number of Tu B’Shvat seders this year.

But here’s a question: what’s all this stuff about the four worlds? 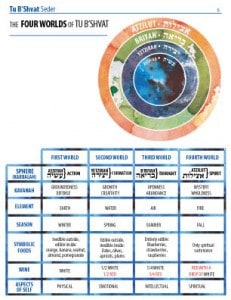 The “four worlds” come,  from the kabbalistic tradition. Parts of that tradition are very accessible to me. When I sing lecha dodi on Friday night, that’s from the kabbalists of Tzfat – and I love it. When I count the omer, from Pesach to Shavuot, I have in mind the seven sefirot of the kabbalists, and that too is incredibly meaningful.

But the four worlds? Not so much.

And here’s the thing: I’m not going to explain the four worlds to you right now. If you’re really interested you can look it up on the web, find a book, go back to source texts, learn with a chevruta, mull it over, learn some more, integrate the learning into your life – that’s what being Jewish is about. I don’t rule out understanding the four worlds a little better at some future time in my life. But thus far – they’re not meaningful to me, and I don’t teach them at my Tu B’Shvat seder.

The fact that something in the tradition isn’t meaningful doesn’t mean you always ignore it. On many occasions in my life, davening has not been meaningful to me, but I get that davening is central to Jewish tradition, so I’ve been willing to bash my head against it, if necessary, out of respect for that tradition.

But I don’t feel this way about the four worlds, and what I want to say is: liberate yourself, on Tu B’Shvat, from stuff that isn’t meaningful to you – because there’s so much that is meaningful, or could be, or should be.

Partly this is because, as the late Reb Shlomo Carlebach, z”l, taught, each holiday comes to remind us of something that, ideally, we should think about throughout the year. So Tu B’Shvat, nominally the “new year for trees,” actually comes to remind us of the myriad ways that our life depends upon the natural world. That’s meaningful, and it throws up lots of things to think about and learn about.

So drink four cups of wine – that’s a riff on the Pesach seder, which we do understand – and think about the world that sustains you. If you want a rich seder, here’s one idea: put on your table the seven species that are indigenous to the land of Israel (that’s a Tu B’Shvat tradition) and seven foods that grow where you live, and have a conversation about those contesting values in contemporary Jewish life: a commitment to the land and people of Israel; a commitment to the food folkways and traditions of our people, in all the lands we traveled through; and a commitment to localism and local foods.

If you want to plan your own Tu B’Shvat seder, Hazon has a slew of free resources to help you do so. You can download our Tu B’Shvat haggadah, leaders’ guide, music, videos and a great cartoon from G-dcast for free at hazon.org/tubshvat. We’re grateful to the Jim Joseph Foundation for supporting this work, and we’re excited that both Birthright Israel Next and Moishe Houses around the country (and elsewhere) are producing more than 100 Tu B’Shvat seders using these materials. Check out the seders that Hazon are sponsoring in New York, San Francisco and Denver.

Nigel Savage, originally from Manchester, England, founded Hazon in 2000 by riding his recumbent bike across the US. He worked previously in the English equivalent of Wall Street, and was a founder of the New Israel Fund in the UK. He studied at Pardes, Yakar and Hebrew University. In 2008, he was listed in the Forward 50, the Forward’s annual list of America’s 50 most influential Jews.

Tu B’Shvat: From the 1600s to Today
A very special invitation from Inigo Montoya