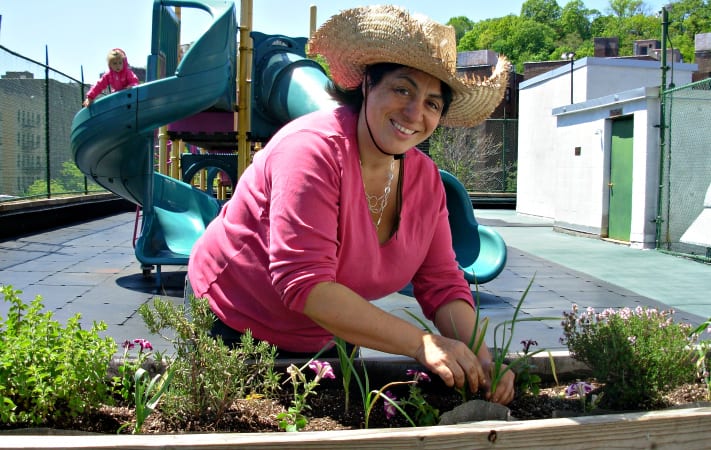 We are committed to helping Jewish organizations integrate environmental sustainability into their mission, programs, and operations. Here are some resources for getting started on your own greening initiatives*:

*To access even more resources on Hazon’s rich Resource Bank, apply to join the Hazon Seal of Sustainability program today!

Hazon’s resource bank has been a phenomenal resource through the seal process. The sheer depth of information is only matched by its clarity and variety. 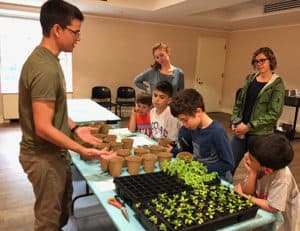 Getting started on greening your institution can feel overwhelming. When there is so much to be done, it can be difficult to navigate which steps to take and which projects to prioritize. Look for tangible, realistic goals and target “low-hanging fruit” -projects that are cost-effective and easily executed. Check out these Ten Tips for Greening your institution! 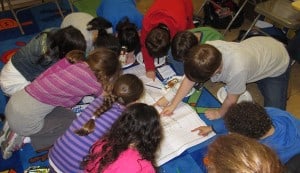 Participating organizations complete sustainability projects throughout the year in order to receive seal certification. The goal is to achieve deep institutional change in your community. Want to see what some of our seal sites are up to? Check out some awesome projects that our seal sites have completed in the three main categories of Food, Facilities and Ecosystems! 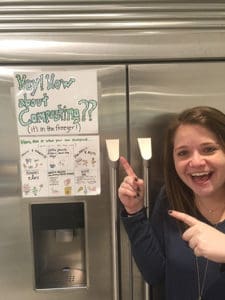 How did they do it? Greening is a process of constant learning and growth. The rewards can be immense: saving money, helping the climate, and energizing your community. However, the task can seem daunting.

Thankfully, you don’t have to reinvent the wheel. Staff, volunteers, and activists at Jewish organizations have already put countless successful greening projects into place. We invite you learn from these organizations’ experiences as you green your own institution.

Dive into our in depth Case Studies and Hazon Seal Spotlights to get inspired! Learn about the different initiatives stewarded by our participating sites, from shuls to schools. Read about their challenges, creative initiatives and successes as they progress on their journeys towards a healthier and more sustainable community!

Holy Use: Relating to Resources Sustainably: Article by Yonatan Neril that discusses Jewish sources about reuse.

Heschel-Inspired Pesach Haggadah Supplement: The Heschel Center for Sustainability created this seder supplement which focuses on social, environmental, and economic issues in Israel.

Hazon Green Kiddush Guide: An easy-to-use guide to help you host a Green Kiddush, includes specific suggestions on how to schedule and promote a vegetarian Green Kiddush, a list of concrete ways to make it “green,” tips associated with each suggestion, and templates of educational signage

Rethinking Your Simcha (by Congregation Beth Shalom): An in depth resource that helps you make every part of your event more

Tips and Resources for Hosting a Sustainable Event: Are you looking to make your events more sustainable? This guide from Yale will help you start.

Green Event Planning Checklist: Use this checklist before the start of every event to make sure you are making it as sustainable as it can be.cl

Institutionalizing Greening Checklist: Use this tool to make greening a part of your institution’s regular operations.

“A Brief Introduction to Change Management”:  Learn how to facilitate transformative change in your institution.

Sustainability Posters: Yale’s Office of Sustainability offers useful informational posters about environmental issues, which can be used to promote greening in your institution.

Risky Business: The Economic Risks of Climate Change in The United States: Jewish organizations, like governments, are prone to “short termism.” The Risky Business Project warns that it is time for businesses and institutions to factor climate change into long-term decisions and create a plan to mitigate exposure to risk.

This Changes Everything by Naomi Klein – Exposes capitalism as the ultimate barrier to addressing the climate crisis and calls for a restructuring of our economic system.

Carbon Shock: A Tale of Risk and Calculus on the Front Lines of the Disrupted Global Economy by Mark Schapiro – Explores the various financial impacts of global climate change.

The Sixth Extinction: An Unnatural History by Elizabeth Kolbert – Uses the field work of scientists in a range of disciplines to describe the sixth mass extinction in recorded history and to illustrate the connection between human activity and the disappearances of thousands of species.

Flight Behavior by Barbara Kingsolver – Novel about a woman living on a farm in rural Tennessee and an experience that lands her at the center of a heated environmental conflict.

Don’t Even Think About It by George Marshall – Investigates which aspects of human nature prevent us from adequately responding to climate change.

What We Think About When We Try Not to Think About Global Warming by Per Epsen Stoknes – Identifies psychological barriers to climate action and suggests effective methods for communicating about climate change.

Requiem for a Species by Clive Hamilton – Digs deep into the shortcomings of the human species and why humans have, for the most part, ignored constant warnings about the climate crisis.

Collapse: How Societies Choose to Fail or Succeed by Jared Diamond – Traces the rise and fall of different societies throughout history and discusses key factors that lead to societal collapse, like environmental damage, population rise, and poor political decisions.

The Enemy of Nature: The End of Capitalism or the End of the World?  by Joel Kovel – Argues that capitalism is the root of most social and environmental ills and suggests a new kind of “ecosocialism.”

Eaarth: Making a Life on a Tough New Planet by Bill McKibben – Calls for significant societal change to adapt to the changed planet humans have already created.

The Flooded Earth: Our Future in a World Without Ice Caps by Peter D. Ward – Describes and predicts what the world will look like in the future after sea levels have risen.

Last Child in the Woods: Saving Our Children From Nature-Deficit Disorder by Richard Louv – Explains how decreased exposure to nature is harmful to childhood development.

Storms of My Grandchildren: The Truth about the Coming Climate Catastrophe and Our Last Chance to Save Humanity by James Hansen – Urges society to take action against climate change and the use of fossil fuels, written by one of the nation’s leading climate scientists.

The Omnivore’s Dilemma: A Natural History of Four Foods by Michael Pollan – Analyzes food chains and comments on modern challenges in the food system.

The Bet: Paul Ehrlich, Julian Simon, and Our Gamble Over Earth’s Future by Paul Sabin – An environmental history of partisan politics and American debates over earth’s future prosperity from the ‘60s – ‘90s.

A Sand County Almanac: And Sketches Here and There by Aldo Leopold – Observations and musings about humans’ relationship to the natural world, written by one of the most famous conservationists of all time.

Natural Capitalism: Creating the Next Industrial Revolution by Amory Lovins, Hunter Lovins, and Paul Hawken – Presents a vision for how to transform a capitalist economy into an economy that enriches, and even mimics, the natural environment.

Silent Spring by Rachel Carson – A controversial environmentalist manifesto, published in 1962, that exposes the dangers of indiscriminate pesticide use.

Walden by Henry David Thoreau – A transcendentalist novel about Thoreau’s experience living secluded in the woods.

Torah of the Earth: Exploring 4,000 Years of Ecology in Jewish Thought (Volumes 1 and 2) by Rabbi Arthur O. Waskow – Uses Jewish texts and wisdom to frame the environmental crisis.

The Way into Judaism and the Environment by Jeremy Benstein – Introduces the key concepts in the Jewish approach to environmentalism.

Kabbalah and Ecology: God’s Image in the More-Than-Human World by David Mevorach Seidenberg – Proposes a new understanding of God’s image and a non-anthropocentric interpretation of the Torah.

Eating Animals by Jonathan Safron Foer – Looks at our industrial livestock industry and analyzes the many problems associated with it.

The Lorax (1972) – Short film based on Dr. Seuss book about a fictional creature who defends trees in the wake of industrialization. Communicates a conservation message to a younger audience.

An Inconvenient Truth (2006) – Al Gore’s groundbreaking documentary explains the devastating impacts of climate change and what we can do about to stop them.

King Corn (2007) – Documents two friends’ stint as corn farmers in Iowa and the troubling things they learn about the food system.

WALL-E (2008) – Pixar film about the world after earth has been destroyed by human destructiveness. Conveys important environmental messages about being active outdoors, eating healthy, and reducing waste and consumption.

Disruption: Climate. Change. (2014) – Offers a behind-the-scenes look at the organizing of the People’s Climate March as well as interviews with key scientists and activists about why our actions thus far have been insufficient to tackle the magnitude of climate change.

Cowspiracy (2014): This documentary gives an in depth look at where our meat comes from. It is an eye opening documentary into our modern industrial livestock industry.

Bash the Trash: A fun troupe of musicians that offers workshops about how to make musical instruments out of waste materials.

NRDC Get Involved: Educational resources for teaching kids about the environment, from the Natural Resources Defense Council.

CABE Green School Day: A helpful, in-depth guide with over 100 lesson plans for a Green Day at school to teach young children about climate change and the built environment.

A Zeek article: An article about the importance of Jewish environmental education

Nature Explore: This website provides resources to help you connect children with the outdoors

Citizen’s Climate Lobby: A grassroots network of climate activists that trains citizens to lobby their lawmakers for climate action.

The Coalition of Immokalee Workers (CIW): The CIW fights for farm workers rights through and is run by the farm workers themselves.

Hazon’s Guides to Healthy and Sustainable Holidays: Hazon’s guides to Shabbat, Kiddush, Tu B’Shevat, Hanukkah, Passover, Sukkot, Rosh Hashanah, Shavuot, and Purim will show you how to make the right food choices for your holiday meal.

Alumot Garden Curriculum: A manual created by the Jewish Farm School to help educators create gardens within a framework of Jewish texts, holidays and rituals.

EWG Shopper’s Guide to Pesticides in Produce: Environmental Working Group offers lists of the safest and most dangerous fruits and vegetables, as measured by pesticide content.

Food Waste Weekend: Learn how to speak to your congregation about food waste in America from available speeches and materials.

Save the Food: Check out these tips to learn how to reduce food waste in your home and community.

Beyond Pesticides: A wealth of information about sustainable pest and weed management.

Ample Harvest: This organization connects people who have food to donate to food pantries through out the country.

Hazon CSA Bible 2014: Although HAzon doesn’t currently have a CSA anymore, this guide will still be helpful if you are looking to start one in your community.

Cool Climate Calculator: Use this calculator to estimate your organization’s carbon footprint in an easy to manage, simple manner that will help you track your progress as you take steps to become more energy efficient.

DSIRE: The Database of State Incentives for Renewables and Efficiency provides funding opportunities for clean energy and energy efficiency upgrades across the US, listed by state.

Exploring Solar Energy Student Guide: Curriculum for students in grades 5-8 that discusses solar energy. It uses experiments to explore what solar energy is and how it works.

Story of Stuff: Videos and educational resources about consumerism that explore how our everyday choices are connected to global environmental, economic, and social challenges – and how we can work together to create a more healthy and just world.

EPA’s Guide to Learning and Teaching about the Environment: The EPA provides a wide variety of environmental educational resources, from homework activities to lesson plans and grants for teachers, information about children’s health in educational spaces, and more.

GrowNYC Stop & Swap: GrowNYC can help plan a Stop & Swap at your organization or give you resources for you to plan one yourself.

Neshamah Project: Start a Gemach, which is a lending library where people can share items they don’t necessarily need to own, like power tools and party supplies.

Repair Cafe: Start a Repair Cafe, where people can help each other fix items they would have discarded.

Big Reuse: Donate old or unused building materials to Build It Green; pick up the items you still need from their extensive collections.