The Hazon Seal of Sustainability has its origin in the Jewish Greening Fellowship (JGF).

From 2009-2014, more than 50 JCCs, camps, schools, congregations, and social service organizations in the New York region participated in the Jewish Greening Fellowship. They worked to cut their energy use, reduce waste and pollution in operations, and engage their constituents in Jewish environmental education.

With the generous support of the Jewish Community Development Task Force of the Commission on Jewish Identity and Renewal of UJA-Federation of New York, Jewish Greening Fellows at these institutions received intensive training in environmental change leadership and their organizations received funding to support their sustainability goals.

The Hazon Seal builds on the success of this program and aims to work with organizations across the country to help green their institutions and become more sustainable.

The information I am learning and the programming the Jewish Greening Fellowship inspires has had a greater impact on my community and my personal life than any other kind of management oriented training I have had before. It has inspired me to action, and to bring others to action, and it has made me a better citizen of the Earth.

The following organizations made a commitment to environmental change leadership and Jewish values of stewardship by participating in the Jewish Greening Fellowship:

The Jewish Greening Fellowship was one of the most prominent Jewish responses to the climate crisis – and the most significant investment made by any Jewish Federation in this country to address climate change or the environment.

From 2010 to 2020, JGF organization will have saved an estimated 8.3 million by cutting energy use, switching to renewable energy sources, and reducing waste in operations. This constitutes an over 300% return on the UJA-Federation of New York’s initial $2 million grant investment in the Jewish Greening Fellowship. 46 JGF organizations have completed energy audits of their buildings and 13 JGF organizations installed solar panels. 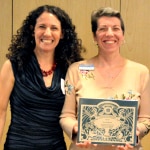 JGF green teams have brought together more than 600 people (including agency executives, facilities staff, and laypeople). The teams’ sustainability programming and communications touched more than 175,000 people through its work. The vast majority of JGF Fellows indicated that as a result of the greening work, their institution as a whole became stronger, they formed new partnerships in their broader community, and they found that greening became part of their organization’s identity.

75% of participating institutions strongly agreed that greening has enriched Jewish learning and living in their institution. More than 33,000 people participated in environmental education programs at JGF institutions. In 2013-2014 alone, JGF agencies created 42 new programs combining environmental education and Jewish values. During the Shmita (sabbatical) year, JGF funded over 20 different Shmita-themed educational programs. Jewish organizations also energized their members around the People’s Climate March, the largest demonstration for climate change in history Of the 1,500 groups that co-sponsored the climate march, 1 in 10 was Jewish. This remarkable Jewish support would not have been possible without the participation of many JGF organizations and the diligent organizing work done by JGF staff.