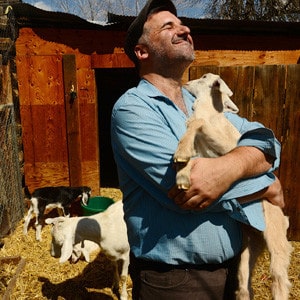 BOULDER, CO – APRIL 10, 2014: Rabbi Marc Soloway hugs a baby goat named Sheleg at the Jewish Community co-op farm near his synagogue in Boulder, Co on April 10, 2014. Sheleg is hebrew for snow. Soloway was this year named one of America’s most inspiring rabbis. He also had a tough year last year when his house was damaged by the floods as well as his synagogue, Congregation Bonai Shalom , was so badly damaged that they had to close their doors for the time being and needs almost $500,000 in repairs. One reason he won the most inspiring rabbi is that he is very eco-conscious, and attends farmers markets and CSAs. (Photo By Helen H. Richardson/ The Denver Post)