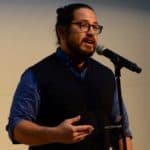 Yoshi Silverstein catalyzes the innate potential of people, place, and communities through education, coaching, consultation, writing, and landscape design. He holds over sixteen years of experience in both Jewish and secular outdoor, food, farming, and environmental education with a focus on place-based learning, nature connection, and human movement; and is also founder of Mitsui Collective, a catalyst for reconnecting people to ourselves, to each other, and to nature through movement, play, exploration, and Jewish tradition. He holds a Master’s degree in Landscape Architecture from the University of Maryland, College Park, and a B.A. in European Cultural Studies and Near Eastern/Judaic Studies from Brandeis University. Yoshi is a proud alumnus of the Dorot Fellowship, the Selah leadership program (Cohort 14 – Jewish Leaders of Color), and the PresenTense NYC Fellowship for Jewish social entrepreneurs. He really likes Fellowships.

Yoshi has worked as Education Director at the Pearlstone Center (back when it was still Kayam Farm) and has taught throughout the US and Israel, including several seasons as a Teva educator and stints at Camp Wise in Cleveland and Camp Solomon Schechter in Olympia, WA. He has ridden in three Hazon NY Bike Rides (and soon his fourth), attended/presented at two Hazon Food Conferences, and has more spiral-bound resource guides than is probably useful. He is a member of the Selah Advisory board and Upstart Alumni Advisory Council, and a founding member of the Repair the World NYC Advisory Board.

Originally from Spokane, WA, Yoshi has resided in roughly thirteen different places since his eighteenth birthday – including the Olympic Mountains, central and northern Idaho Rockies, Berkshire Mountains, and the Arava Valley – and now lives in the Bushwick Plains of Northern Brooklyn with his wife Abby, daughter Freya, and pup Norman Jellybean.

Hannah works to collaboratively build the JOFEE filed, specifically leading and directing the JOFEE Network Gathering, the JOFEE Leaders Institute, and supporting the JOFEE Fellowship. Previously Hannah has worked in non-profit event management, fundraising, and outdoor education for a variety of different organizations across the United States. Hannah was a Legacy Heritage Fellow at Gratz College where she earned  a M.S. in Nonprofit Management and Jewish Studies. She also holds a B.A. in Anthropology and Religious Studies from North Carolina State University and is a certified Yoga teacher. She is an avid outdoors-woman and proudly shares her home – a self-built tiny house on wheels – with her husband, dog, and cat.